A Young Man with Hip Pain due to Piriformis Syndrome

A 33-year-old Caucasian male (CM) used to run a mile three times per week until 3 years ago when he started to complain of right hip pain. He has been exercising since he started school and attributed his pain to early arthritis. The hip pain was provoked by exercise and radiated to the right popliteal fossa. The right hip pain gradually increased to the point that he stopped performing any vigorous physical activity.

Stable vital signs (VSS). There was a pain on flexion combined with medial rotation of right hip. Otherwise, the examination was normal.

What diagnostic tests would you suggest?

An X-rays of the hip.

The X-rays of the pelvis and the right hip were normal. There was no fracture or osteoarthritis. The MRI of the hip and lower back was also negative.

What is the cause of the right hip pain in this patient?

Arthritis is less likely in a such young patient with a generally unremarkable physical examination.

Piriformis muscle syndrome is the likely cause of pain.

What is piriformis muscle syndrome?

Findings include buttock pain which is exacerbated by prolonged sitting. Physical examination usually shows tenderness in the sciatic notch and buttock pain inflexion, adduction against resistance, and internal rotation of the hip.

The pain radiation to popliteal fossa is due to compression of the sciatic nerve by the hypertrophied piriformis muscle. 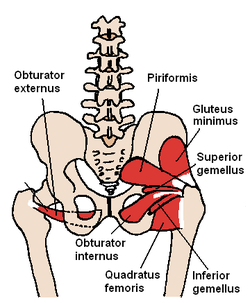 What is the treatment for piriformis muscle syndrome?

Physical therapy is the first-line therapy for piriformis syndrome.