A 58-year-old African American male who is a nursing home resident due to advanced Parkinson's disease is admitted to the hospital with chief complaint of generalized weakness. His laboratory results show acute renal failure (ARF). The patient has had poor PO intake of fluids and food for the last 3-4 days. 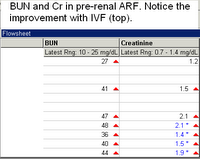 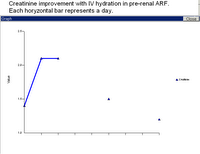 What is the most likely diagnosis?
Prerenal ARF due to dehydration

How to confirm the diagnosis?
UA
Urinary sodium and creatinine to calculate the fractional excretion of sodium (FENA)

What other tests would you order?
BMP in 6 and 24 hours
Renal ultrasound to rule out urinary obstruction and nephrolithiasis

What treatment would you start for this patient?
Foley catheter
Strict I/O
NS at 150 cc/hr x 2 L, then 125 cc/hr, adjust the rate of IVF according to I/O, avoid fluid overload.

What happened?
FENA is 2.16%.
Renal U/S ruled out urinary obstruction.
The patient had good urine output with IVF and was in a positive fluid balance.
There was a downward trend in BUN and creatinine. 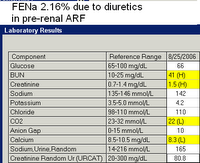 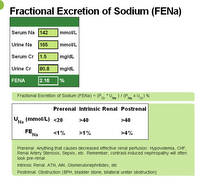 FENa greater than 1% due to diuretics in prerenal ARF. MDCalc.com calculator of FENa (right).

Does FENa higher than 1% rules out prerenal ARF?
No. Patients who receive diuretics may have prerenal ARF with FENa greater than 1% due to diuretic-induced sodium excretion.

Final diagnosis:
Pre-renal acute renal failure due to dehydration. FENa is higher than 1% due to diuretics.

What did we learn from this case?
The fractional excretion of sodium (FENa) is useful in diagnosing prerenal ARF. FENa is less than 1 % in most patients with pre-renal ARF.

Patients who receive diuretics may have prerenal acute renal failure but the fractional excretion of sodium may be increased by diuretic-induced sodium excretion. Therefore, these patients may have FENa greater than 1% in the presence of prerenal ARF.

In patients who are receiving diuretics, a fractional excretion of urea (FEUrea) can be useful since urea transport is not affected by diuretics. FEUrea of less than 35% is suggestive of a pre-renal state.

Email ThisBlogThis!Share to TwitterShare to FacebookShare to Pinterest
Labels: Nephrology