A 67-year-old African American male is admitted to the hospital with chief complaint of generalized weakness and potassium level of 6.5 mEq/L. His laboratory results show acute renal failure (ARF). The patient has severe osteoarthritis and takes high-dose nonsteroidal antiinflammatory drugs (NSAIDs). In the recent heat wave, he noticed that he did not go to bathroom as often as he used to for the last 2-3 days.

BMP in prerenal ARF (click to enlarge the image).

Prerenal ARF due to volume depletion.

How to confirm the diagnosis?

UA.
Urinary sodium and creatinine to calculate the fractional excretion of sodium (FENA).

What other tests would you order?

BMP in 6 and 24 hours.
Renal ultrasound to rule out urinary obstruction and nephrolithiasis.

What treatment would you start for this patient?

FENA of 0.77 % confirmed the diagnosis of prerenal failure.
Renal U/S ruled out urinary obstruction.
The patient had good urine output with IVF and was in a positive fluid balance.
Potassium normalized after treatment with Kayexalate, Insulin and D50.
There was a downward trend in BUN and creatinine. 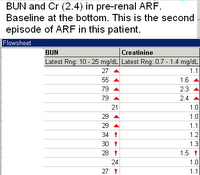 BUN and Cr in prerenal ARF (click to enlarge the image). 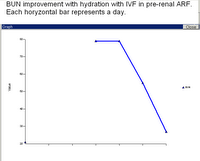 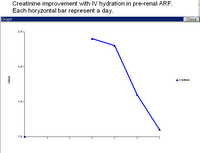 BUN and Cr improvement with IV hydration in prerenal ARF (click to enlarge the images).

Renal ultrasound in prerenal ARF (click to enlarge the image).

What did we learn from this case?

ARF is frequently defined as an acute increase of the serum creatinine level by 25 % from baseline.

The fractional excretion of sodium (FENa) is useful in diagnosing pre-renal ARF. FENa is less than 1 % in many patients with prerenal ARF. Intravenous hydration is the mainstay of treatment.

Email ThisBlogThis!Share to TwitterShare to FacebookShare to Pinterest
Labels: Nephrology