Hemoptysis in a Patient with Lingular Pneumonia

A 53-year-old African American female (AAF) was admitted to the hospital with a chief complaint (CC) of coughing up blood for one day. She was seen two days ago in the ED with a cough, diagnosed with bronchitis and prescribed Augmentin. Her CXR did not show any infiltrates. She started to cough up blood with the sputum, and to have shortness of breath (SOB). She also had sore throat, runny nose, and chills.

The patient has hemoptysis which is a medical emergency and a potentially life-threatening condition. You should attempt to measure the approximate amount of bloody sputum.

The DDx for hemoptysis can be remembered by the mnemonic BATTLE CAMP:

What laboratory workup would you order?

CBCD, CMP, ABG.
Repeat the CXR despite the previous CXR being done only 2 days ago.
EKG.
INR/PTT.
Type and screen 2 U PRBC.
Spiral CT to R/O PE?

The CXR showed a lingular infiltrate. The spiral CT confirmed the infiltrate and ruled out PE. CBCD revealed WBC of 18,000 with 70% bands.

Moxifloxacin IV was started. Blood and sputum culture were negative.

The patient was afebrile and had no further hemoptysis. The PPD was negative and the follow-up CXR showed a resolving infiltrate. Her condition improved and she was discharged.

What did we learn from this case?

Hemoptysis is a medical emergency. Occasionaly, the cause may be less dangerous such as bronchitis or pneumonia. Any patient with hemoptysis needs urgent evaluation and treatment. 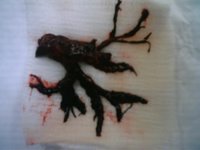 Blood clot cast of the bronchi of a patient with lung cancer who bled into the airway. Image source: unboundedmedicine.com, used under the license of Creative Commons.