Confusion and Decubitus after a Hospitalization

89 yo CF, NH resident was admitted to the hospital due to worsening CHF. She was too demented to complain of anything but her legs progressively became more swollen. Before the admission, she was a lively person, "pleasantly demented" (as it usually said by non-professionals), and up-and-about as much as she was allowed by her DJD.

What do you think is going on?
CHF exacerbation due to: fluid overload, increased salt intake, URTI, possible silent ischemia, etc.

Why is the right leg slightly bigger? Is it due to cellulitis or DVT?
There are no other local signs but edema, and the NH physician decided to treat the CHF first.

What would you do?
Increase Lasix dose
Check CBCD, BMP, BNPep, CXR
Control the BP by increasing Lisinopril dose

What happened?
BNPep was 2090, the regular NH physician was off, and she was admitted to the hospital under a different doctor covering for the weekend.

She was started on Heparin IV, Coumadin and aggressive diuresis with Lasix. Coreg was added to the medications and she was D/C'd to the NH 4 days later.

Now, she is back at the NH and you go to see her. She is very confused (more than before), fatigued, prostrated in bed, staring at the ceiling, and barely answering your questions. She has no complaints whatsoever and the leg edema is gone.

What is your diagnosis?
Change in mental status

What is the reason?
First, we start with the vitals.
Her BP is 80/40 sitting, and she is too weak to stand up but denies dizziness.

The most likely reason is the addition of Coreg 3.125 mg BID to the BP regiment of this 89-yo lady.

The rest of the exam reveals a new, stage IV sacral decubitus - 10-15 cm ecchymoses with central 3 cm eschar area over the sacrum. 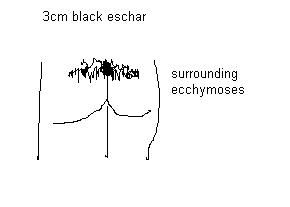 What happened?
Fluid bolus was given to restore the BP to 110/70. Lisinopril dose was decreased and BP check was ordered QAM for one week. Wound care consult was called. BMP and Mg++ were ordered to monitor for electrolyte disturbances after the high-dose Lasix,

Final diagnosis:
CHF exacerbation and RLE DVT
Confusion due to hypotension secondary to overzealous BP therapy in an elderly patient
Decubitus as adverse effect of the recent hospitalization

What did we learn from this case?
In geriatric population the focus is on improving (or preserving) the functional status rather than on treating diseases per se. This patient was probably better off before the hospitalization, despite her leg edema (which she did not complain of).

Although her CHF and DVT were treated appropriately, she left the hospital confused and with a sacral decubitus.

Fighting Bedsores With a Team Approach. NYTimes, 02/2008.
Currently no drug has clearly been shown to be of value in the treatment of agitation in dementia - BMJ http://goo.gl/vjtNj

Email ThisBlogThis!Share to TwitterShare to FacebookShare to Pinterest
Labels: Geriatrics